The following[1] entry is given in Brigham Young's diary, dated January 6th, 1842: 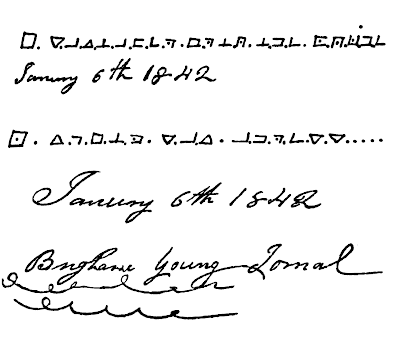 Ciphers like this were published and circulated widely in anti-Masonic exposes in Joseph Smith and Brigham Young’s day. The possible relationship between Brigham Young’s cipher and Royal Arch freemasonry is of particular interest, as it provides additional evidence to confirm that the Saints indeed had access to secrets of Royal Arch freemasonry before Joseph Smith was formally initiated (on March 15, 1842), and before the Nauvoo endowment was introduced shortly thereafter (May 4, 1842).[3]
I mentioned Brigham Young’s encrypted journal entry online recently, identifying the cipher with Royal Arch freemasonry. But to my surprise, one LDS apologist (writing under an anonymous pseudonym and claiming to be Mason) denied that the cipher Young employed was even a Royal Arch cipher at all:

I asked the apologist to substantiate his claim that the cipher was “more likely based upon a similar form of cipher upon which Royal Arch cipher is derived, having a common but divergent source.” He then quoted historian Arturo de Hoyos:

The Royal Arch cipher used in the United States is actually a variation of a Hebrew Qabalistic cipher known as aiq beker or "the Qabalah of Nine Chambers." {24}

As will later be seen, the apologist’s use of Arturo de Hoyos as an authority on the matter ended up biting him in the end.

He additionally posted an image of a source that Arturo de Hoyos had cited—a page found in Francis Barrett’s The Magus (1801): 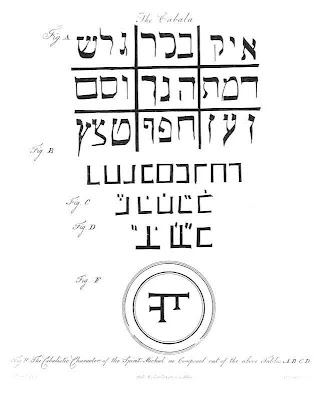 He neglected to explain, however, exactly how Arturo de Hoyos’s commentary (which said nothing about Brigham Young, or his journal entry) confirmed that the cipher Young employed was “more likely based upon a similar form of cipher upon which Royal Arch cipher is derived, having a common but divergent source.” He remained convinced that the ┴ illustrated on Barrett’s page was beyond coincidence (although triangles were entirely missing in the illustration). “The ┴ character most certainly came from the Qabalistic cipher,” insisted the apologist.

Being intreagued by this apologetic, I decided to further research Brigham Young’s cipher. As luck would have it, Arturo de Hoyos was the first scholar to have translated Young’s journal entry. De Hoyos decoded the entry as follows:

I WAS TAKEN INTO THE LODGE

I spent about an hour, toying around with the entry and translation. My hypotheses being: 1) the inverted "T" figures were just that—inverted T's; 2) the triangles were actually the V-shaped characters (having the third line drawn to make them complete triangles). I then drew the template for the Royal Arch cipher key, and compared Arturo de Hoyos' translation to the characters in Brigham Young's journal entry, to see where they fell (plugging in my results, later filling in missing letters not found in the journal entry). My hoped for result: that the letters would appear on the grid in an alphabetical order, and therefore show (at least) a dependence on the Royal Arch cipher.

The results[7] of my experiment: 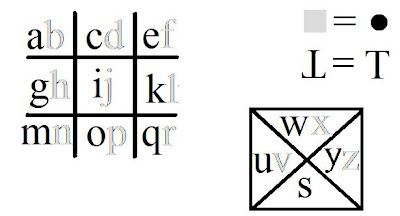 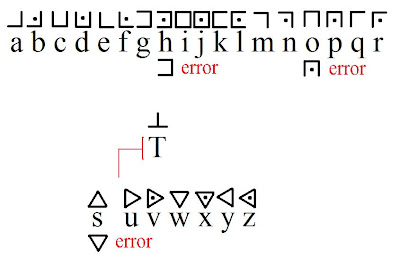 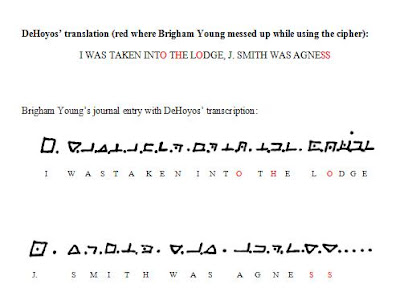 As one can see, the cipher characters for letters A-R are identical to the Royal Arch cipher transcribed by Oliver Huntington two years later

The S-Z portion of the key:

The journal entry had five errors out of thirty-six characters—92.8% correct. This percentage is comparable to an encrypted text found on this[8] Royal Arch medal:

Five errors out of forty-one characters—only 91.8% correct. Adding or omitting dots in the characters, or reversing the their orientation, were very common errors to make. Brigham Young was of no exception.

One can see that this Royal Arch cipher key above is slightly different than the one Oliver Huntington recorded in his diary. As it turns out, several (if not countless) versions of the Royal Arch cipher exist—a fact that severely undermines the apologist’s argument, which assumed that Brigham Young’s cipher wasn’t a “Royal Arch” cipher at all, simply because it was different from the one he (the apologist) was most familiar with.

Although other forms of the Royal Arch cipher can be listed here, I will instead share an email[9] that I received from Arturo de Hoyos, the historian that the apologist relied upon to challenge my initial claim (posted with permission):

Yes, I am the person who first decoded Brigham Young's January 6, 1842 journal entry. It was indeed written in a form of the Royal Arch cipher. However, there are many permutations of this substitution cipher. The letters may be placed in almost order in order to make it more secure. I believe that Brigham rearranged the letters for this very reason.

The Masonic exposures of the Morgan episode merely revealed the *simplest* and *most common* forms. You note that you have been unable to find a form with all the symbols used. Subsequent to decoding the diary entry I have seen manuscripts which employ all the symbols Brigham used. It is, in essence, quite unsophisticated.

I'm happy that you've enjoyed "Committed to the Flames." It was a fun project.

Oddly enough... even after I presented this information, the apologist continues to insist that he is right. Go figure.

[1] Image from http://www.masonicmoroni.com/Images3.htm
[2] Ibid.
[3] Royal Arch freemasonry contains important masonic parallels to the LDS temple endowment, and therefore appears to be a probable source from which Joseph Smith and Brigham Young (who, with the help of Wilford Woodruff and others, revised the endowment after Smith’s death) drew their inspiration.
[4] http://www.mormonapologetics.org/topic/45897-mormons-masons-temple/page__view__findpost__p__1208742878
[5] Arturo de Hoyos, "The Mistery of the Royal Arch Word," Heredom vol. 2 (1993), 11 and fn 24.
[6] Arturo De Hoyos decoded this entry on May 21, 1991; as cited in Tim Rathbone's article, Brigham Young's Masonic Connection and Nauvoo Plural Marriages, fn 32.
[7] Three images created by author.
[8] Everett R. Turnbull and Ray V. Denslow, A History of Royal Arch Masonry (1956) vol. 3, p. 1366-67.
[9] Arturo de Hoyos, email to author, 30 October 2009.
Posted by Mike Reed at 1:53 PM

Mike Reed
has a MA in Liberal Arts and a BA in Humanities/Religious Studies from CSU Sacramento, and is working on his PhD in Christian History at GTU Berkeley.

Cultural Mormon. noun. A long-time member of The Church of Jesus Christ of Latter-day Saints, who has lost his/her faith, but continues to have healthy and strong relationships with friends and family members who remain active in the Church.

Cafeteria. noun. A place where one is free to pick-and-choose the food-for-thought served to them. You may not like everything, but it is all you can eat, and the price is cheap! (Tips not required, but always appreciated.) 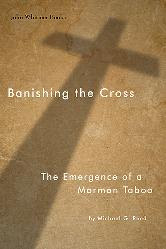